In Jottings from a Far Away Place Brendan Connell combines the timeless, mannered assurance of the Eastern discursive essay with the experimentation of the Western avant-garde.  A book that is like a collection of bulletins from the world of dreams. 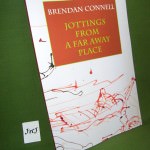 In Blue on Blue by Quentin S Crisp (please note this is NOT Quentin Crisp of The Naked Civil Servant Fame) in an artificially engineered loop of parallel time called the Alternative States of the American Fifties, Victor Winton, a talented but unfulfilled cartoonist, struggles with the contradictory forces held in precarious stasis by the loop. 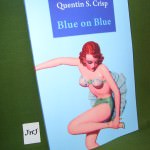 You may wonder why we take pains to point out that this is NOT The Naked Civil Servant (for those of us old enought to remember of course!)  – it’s  because in the past we were offering for sale a SIGNED book by Quentin S Crisp and received a stinging email asking us how we could offer a SIGNED book for sale from someone who was dead before the title was published!  We politely explained that this was a different author….  and that Quentin S Crisp would be rather upset to find out that he was dead… we never did receive an apology from the irate emailer!

Check out these lovely new books on our website.

A long time ago in a…. err didn’t someone else use that phrase!  Anyway, a few years back we were approached by our good friend, author John B Ford of Rainfall Books, to see if we would be interested in publishing a book in collaboration with Rainfall.  This subsequently appeared as Cthulhu’s Creatures.  As we had never ventured into publishing, and with John as our guide and mentor, we said yes!  Only 100 copies were produced and we’ve noticed them being advertised for silly money now.

One of the contributors to Cthulhu’s Creatures was Franklyn Searight who approached us to say that he’d been very impressed with the product and production and would be we be interested in publishing the final volume of stories written by his father, Richard F Searight, who had been a “pen-pal” of H P Lovecraft.  So being the mad things that we are, we said yes, having first got John on board.  We couldn’t have done this without John.

So began a long journey to get The Cosmic Horror and Others into production.  For various reasons, including Jeff being in and out of hospital six times in a year, it took a long while to get the book published, but finally in 2013 it became a reality as a 100 copy limited edition paperback.

We were VERY fortunate not only to have John on board, but also the Award-Winning Artist Allen Koszowski who  designed the fab cover,  and provided all the internal artwork.  You might not think you know Allen’s work, but if you are a fan of horror then I am sure you will have come across it as he produces artwork for many magazines and publishers.  Jeff is a big fan of Allen’s work and is planning to write a blog shortly about his massive and ever-growing collection of Allen’s prints  and original material.

Whilst we found publishing both books an interesting experience, it made us realise that we are booksellers and NOT publishers and made us appreciate even more the hard work that goes in to producing some of the beautiful books that are coming out nowadays, especially from small press publishers both in the UK and the USA.